View source
watch 01:40
The Sandman Will Keep You Awake - The Loop
Do you like this video?
Play Sound

Yoshihiko Aramaki
William James Moriarty (ウィリアム・ジェームズ・モリアーティ, Wiriamu Jēmuzu Moriāti), also known as just Moriarty, is the main character of MORIARTY THE PATRIOT. His real name is unknown, having assumed the name of his deceased adoptive brother at a young age. His arch nemesis is Sherlock Holmes, & he's a professor of mathematics and a crime consultant. 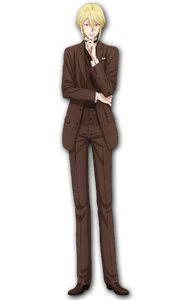 William is a pale-skinned, lean young man with blonde, stringy hair that is medium in length with long side bangs and a prolonged side-fringe. His eyes can be described as somewhat 'expressive'. But his facial expression is almost unintelligible. He has a handsome appearance, and has been told he looks better when he smiles. After the timeskip, he is shown with a black eyepatch covering his left eye.

For clothing, he wears a brown, three-piece suit with a red tie and a golden pocket watch. In some scenes he is seen wearing a top hat and holding a cane.

As a child, when Moriarty lived in the orphanage, he donned a faded maroon-purple scarf, beige trousers, and a white dress shirt underneath a light brown coat. When Albert took him in, however, he changed to an all-black suit with a red necktie, and a black top hat in public.

William is highly intelligent and quite knowledgeable. As a child, his intelligence was said to be 'enough to leave even the adults speechless'. He has a natural talent to grasp everything through his broad knowledge. He likes reading books and is very good at mind games such as chess or cards.

Even at a young age he would read many books, learnt Latin and is literate, using his knowledge to help others. Along with being sharp witted, he is curious about his surroundings which often leads him to being in unusual situations. He is a mathematics prodigy and excelled in it at a very young age of 16. It’s said that he was often in a library without permission, where he learned to read and write along with his brother before being taken in by the orphanage, staying there until being adopted by the Moriartys. There, he was a loving figure to everyone, for other kids and adults loved talking with him. He would teach the kids many things and consult the adults in need, that way, he would be payed with food or money so he didn't resort to stealing in order to feed himself and his brother. After Albert's proposal, he decided to move into Moriarty household only for his sick brother Louis.

After becoming an adult, he has grown up to be an elegant gentleman, a head-to-toe perfect noble. He is quite charismatic, as he can easily associate with anyone, regardless nobles or commoners. His professional mannerism is one of the reasons why people trust him too easily. He has a way with his words and is very good at seeing through lies. His gentle persona is something that everyone loves.

But beneath his gentle demeanor, he can be a calculating man. He can't easily trust anyone, for, he thinks no one in the world is selfless. But he’s reliable to anyone close to him and tries not to let them down. He hates to be in debt. He has a keen observation, which helps him to see through people’s real intention. He’s a person who would do things that would hurt himself and his morals for his ultimate goal. While he seems to only care for his goal of achieving a new, classless world, he cares deeply for his brother Louis, feels indebted to Albert and through complicated schemes he manages to uphold the relationship between his subordinates, for example Moran and Bonde. Thus, he views them rather as his friends than pawns.

He is extremely confident and is a terrific strategist, coming up with long-run schemes to subdue his targets and gather information. Although they are very thought out plans, he does not credit himself for most of what he has done. He never reveals his true intentions, not even to his teammates until the right time. He has complete confidence no matter what type of situation he is dealing with, be it cases or simply bad situations he created in the first place. He’s very good at hiding his tracks and commits every crime perfectly. He can be merciless and methodical, setting up traps to catch his targets to kill them. Occasionally he reveals his opinion of the villains he slays, criticizing their lifestyle, attitude and the heinous crimes they have committed. Sometimes he decides to murder the noble criminals through the same way they had killed the weak, for instance hunting them or refusing to help them as they had. He can be sarcastic to his quarries. Seeing how the asymmetry of the hierarchical society that differentiates the aristocracy and the commoners and creates a wall between them resulting in nobles extorting the poor since childhood, he aimed to abolish the class system of Britain and create an ideal world where every person is equal with an equal right to happiness, which led him to resort to dirty means to achieve his goals.

Assuming no one would ever truly grasp his motive or the world he is steadily creating, William feels a certain solitude despite the shadow of his brother at his side or the support he gets from his friends. At the end of the day, he is nothing more than an indifferent, lonely and despaired person who is so tired of living that he wants to die. Afterall, he is someone with a kind nature, and everything that he did for his plan hurted his psyche. But after meeting Sherlock, he realized that Sherlock was the only person capable of understanding him, even though they had different views and supposed to be enemies, as he writes in his letter to the detective. He felt that he is desperate to have someone acknowledge him, and Sherlock being that someone, he wanted to be his friend. In fact he sometimes envied ordinary people with normal lives, but realizing that he is beyond the point of return and that he himself chose to build an equal world, he remains determined to fulfil his promise and to also die for it, showing his selflessness towards his goal and confirming the Machiavellian path he has chosen. He apparently felt helpless and frustrated at this point. It is shown that after Milverton's death, William's mentality temporarily becomes unstable, fearing that the person he liked most would murder him next. He most likely also blamed himself for Holmes' killing. At the later part of the series, he was mentally exhausted and going under a lot of stress, partially because of the guilt of the murders that he had committed was weighing on him.

Deep down, he is much kinder and humane, who cannot ignore anyone who is in need. He is a bit reticent, not very expressive and sensitive. He is very secretive about himself. Nonetheless, he does care for his teammates and watches out for them. Sometimes, he’s even confused about what he feels towards his close ones. Even to those for whom he truly cares for, he’s never able to express his true feelings. Constantly, he’s afraid that he’ll lose control over himself. It’s said that using his brain often tires him out to the point of passing out without control. Usually, he’s a bit childish, cheerful and easily satisfied. He can also be a bit clumsy at times.

Moriarty is based off his incarnation in the original Sherlock Holmes by the British author Sir Conan Doyle, Professor Moriarty is undoubtedly the most recognizable of Holmes' foes, though he only appears in about two of the sixty Sherlock Holmes stories, with mentions in five others.