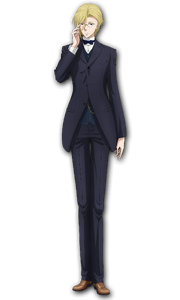 Louis is a light-skinned, slim individual with darkened, scarlet eyes and black glasses. A burn mark remains on his right cheek, which he inflicted on himself at a young age. His blonde hair is of average length, and is styled in a long side-fringe. His lengthened fringe is parted to the right, hiding the majority of his scar.

He dons a navy/royal blue tuxedo, a tie (bow tie in the anime) and waistcoat of the same colour, and light brown loafers. He also carries a golden pocket watch and is occasionally seen wearing a gray bowler hat.

When assisting William with some of the more "dirty" aspects of their plans, Louis tends to remove his glasses. Despite this, he remains lethally accurate when fighting adversaries. Additionally, ever since the Reichenbach Falls incident he appears to have removed his glasses permanently, so it is assumed Louis wears them simply for looks.

As of more recent chapters, in addition to removing his glasses Louis now wears his fringe pushed back leaving his scar exposed.

As a child, Louis wore a white dress shirt with suspenders underneath a dark grey jacket, dark-olive trousers, and a blue cloth tied around his neck in an artistic fashion. Even when Albert's family took him in, he wasn't issued any new clothing, as the family of nobles looked down on him for being so poorly.

Louis had not yet started wearing glasses at this age, and due to not yet having a scar he wore his hair pushed back.

Louis is extremely devoted to his older brother, William, even when committing acts of crime. He is able to do anything Moriarty asks him to do, even if he initially feels that he cannot.

When he was a child, he was weaker due to his heath condition, but was eventually healed thanks to Earl Moriarty through the urgings of Albert. But after growing up, he asserted himself, going so far as to confess to his brother his feeling of being excluded and his will to take part in errands. He is quite loyal to his brothers - especially William.

William is protective of his younger brother Louis, and wants to keep him out of his schemes to protect Louis' innocence. However, once Louis convinces him that he prefers to be useful rather than protected, he shows that he's actually more ruthless than some of William's other henchmen. This can be seen when he and Will took on the group organizing the "Jack the Ripper" kilings; showing no hesitation when it came to killing those responsible, he was even seen smiling on occasion as if enjoying the incident.

The character is based on the less known younger brother of Professor James Moriarty, who was referenced twice in the Doyle canon. Since the manga uses the two brother theory due to Doyle retconning the brother's profession, he's likely based on the incarnation in The Valley of Fear who Holmes referred to as being a 'station master'.

Retrieved from "https://moriarty-the-patriot.fandom.com/wiki/Louis_James_Moriarty?oldid=3196"
Community content is available under CC-BY-SA unless otherwise noted.