The Dancer on the Bridge

The Dancers on the Bridge

Frida Macaulay (フリーダ・マコーリー Furiida Makōrii) is a worker at the Criterion Bar, and the lover of Lucien Atwood.

She has no relatives, with everyone in the bar being like her family instead.

She refused all other job offers, and continued working in Durham.

She is described to be like the bar's "flower". She is a good kid who smiles a lot.

Frida recently fell in a love with a university student named Lucien. Since he is a noble and their status' are so different, it was just like a game at first. According to her friends, she must have felt so as well. However, he is the one that eventually proposes to her. She is very happy about it, and not long after discovered that she is pregnant with his child. Lucien looks like he is pleased about this too.

However, one day, he suddenly stops coming to the bar. In his place, Dudley appears instead. He says something unknown to her; however, it leaves her utterly devastated and she even ends up calling Lucien a "liar". Despite this; a couple of days before her death, she still states that she will raise their child on her own.

However, on the fateful day, opium is found in her room; despite never being the kind of girl to turn to drugs according to her coworker. This has been revealed to be a ploy of Dudley, who is the one who fed her the opium.

It rains while she is walking and swaying around on a bridge near the bar, high above the local river. There are several witnesses; an old man living under the bridge, and several bar patrons and workers. Initially, she is seen singing and dancing atop the bridge before she stumbles and falls to her death in the waters below.

The song is hinted to be something about her and Lucien being "together". According to the manga; because the water went up with the rain, her body has not come up, and was most probably not recovered. In the anime, her body is recovered before William begins asking around about Lucien, with her coworker saying that they buried Frida in a nearby field as they don't have enough money for a proper grave for her.

The truth behind her death eventually comes to light after Dudley's own death, orchestrated by Moriarty. The honor of her and Lucien is also restored as the extent of Dudley's crimes are revealed. Lucien ends up building a beautiful tombstone for her in the local graveyard. He, and the Moriarty gang are seen paying their respects for her.

Frida after the effects of opium, shortly before her death 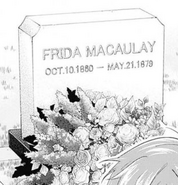