Edit
watch 01:40
The Sandman Will Keep You Awake - The Loop
Do you like this video?
Play Sound

Yusuke Seto
Earl Albert James Moriarty (アルバート・ジェームズ・モリアーティ, Arubāto Jēmuzu Moriāti) is one of the main characters of MORIARTY THE PATRIOT. He is the eldest of the Moriarty brothers and the only true Moriarty. 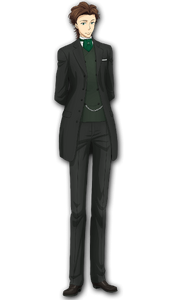 Albert is a tall 6'2"(188), pale-skinned man with a thin build. He has medium-average brown hair with a side-split hair cut, leaving short bangs on either side. Additionally, he has streaks of hair descending down the back of his neck. His eyes are a distinguishable dark emerald, and he is sometimes seen wearing a black top hat.

He wears a dark grey, three-piece suit with a lime green necktie, and occasionally a golden pocket watch.

He seems to have inherited most of his looks, such as his green eyes, brown hair, and even his general hairstyle, from his father, sharing little resemblance with his mother. Despite his biological brother, William, resembling their mother, and therefore having little in common with Albert in overall looks, the two brothers do share a similar facial structure.

Albert has one of the least significant physical changes amongst the main characters after the three year timeskip; the only noticeable difference being he has slightly longer hair, with the back strands now reaching just past his shoulders.

As a child, he wore a navy blue, three-piece suit with beige around the lapel and sleeve folds. He donned a dark-teal bow tie around his collar and a walnut brown waistcoat under his suit jacket.

Albert is a kind nobleman, who had started to hate his family and fellow noblemen for treating commoners poorly and as being lower than them. Though most noblemen in the franchise are portrayed as bad people, Albert is quite the opposite of this, and even as a child he would visit the local orphanage weekly to assist the children who lived there. He has a loyal attitude towards his peers, and is always happy to help others whenever they desire it most.

Despite his warm-hearted nature, he bears a passive-aggressive approach towards bad noblemen, and will resort to even violence if needed. As a result of this, he ended up killing his own family, who looked down on commoners and treated them rudely.

Even if they are not brothers by blood, Albert cares about William and Louis. He throws his full support and resources behind William's plans to abolish the class system to save the impoverished; having been inspired by William's charismatic speech and ideals when they met.

Other than that, Albert has a rather mysterious and charming aura to him, that visibly draws other people in. It is often mentioned how noblemen are sending him invites to parties, and ladies are seen throwing themselves at him, even after he'd given up his noble status.

The character is based on the less known brother of Professor James Moriarty who was referenced twice in the Doyle canon. Since the manga uses the two brother theory due to Doyle retconning the brother's profession, he's likely based on the incarnation referenced in The Final Problem who's referred to as a colonel and Moriarty's older brother.